A Liberian Roadmap to Heal a Broken Land

Johnnette Jallah, a teenager from Lofa County, said her favorite thing about Passport Camp Liberia was making new friends.  Approximately one-hundred and fifty campers from across Liberia had such an opportunity when they traveled to Ricks Institute, a boarding school sixteen miles outside of Monrovia, as they attended Passport’s first ever Liberian-staffed camp and ushered in the New Year.  The importance of such a camp cannot be over-stated in a country where century-long animosities divided the country in warring factions in recent years still remain.

The camp’s theme, “Life Together,” was based on Dietrich Bonheoffer book by the same name. The subthemes of camp were “encounter Christ, embrace community, extend grace, and empower.” Camp director, James Blay, says they strived to reach these objectives during the camp because Bonheoffer said, “God will not allow us to live in a dream world.” While everyone did not meet this goal, Blay said, “I can confidently say that most campers left camp with a new attitude towards community and service to others.”

Blay, who is the Director of Servant Leadership at Ricks Institute, and a recent graduate of Mercer University, is a four-year veteran of Passport camps.  He carried his Passport experience and passion for experiential learning back to his home country and poured it into a team of leaders, which he assembled from the Ricks community and from the Liberia Baptist Youth Fellowship.

There were obstacles.  The demands of the holidays reduced training to a one-day intensive session.  Also, all of the supplies for the camp that were sent in a container from the States did not arrive in time to be used.  However, Liberians are used to challenges and used to doing a lot with a little.  Even with such a short training time and with limited resources, the staff did superb job!

There were obstacles.  The demands of the holidays reduced training to a one-day intensive session.  Also, all of the supplies for the camp that were sent in a container from the States did not arrive in time to be used.  However, Liberians are used to challenges and used to doing a lot with a little.  Even with such a short training time and with limited resources, the staff did superb job!

One of the staffers, Faliku S. Dukuly, a Ricks graduate and student at United Methodist University in Monrovia, said that biggest challenge about building community is to extend God’s love to your neighbors without any limitation, especially to those who are your enemies.â€

In a country where those who committed crimes against their neighbors assimilated back into the general population, the obstacle Dukuly points out is a major stumbling block to community building in Liberia.  For Faliku, the way to bring about this change is through servant leadership, a concept he has committed his life to.  When people began to see such examples lived before them, transformation is possible.

Faliku should know.  He comes from a Muslim family, but he became a Christian through the loving examples set for him by elementary school teachers like Jenneh Devine and sees that kind of example lived out in people like school principal, Dr. Olu Menjay.

Adrian Andrews, an 18-year-old camper from Maryland County said that the “camp was a reminder to him that Christ did not come to be served but to serve.”  Thus, the model for community is Jesus.

It was a bit amusing and revealing when I asked a small group of teenagers if there was anything about the camp they would change?  Several of them were quick to say “the food!”  We would like to have Cream of Wheat instead of Quaker Oats and chocolate milk instead of plain milk. 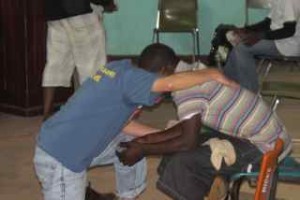 Michael prays with a member of the Passport staff.

As they talked I noticed a couple of them were playing around with their cell phones, much like American teenagers would be doing.  To me both their response about the food and these cell phones were great signs of hope. Six years ago the parents of these teens were struggling to find enough food to give them a meal a day and now they have choices and can complain about what they eat. Now some of them have cell phones. Their families have enough money to send them to camp.

However, Liberia is still one of the poorest places in the world, but times are better.  As the people learn to live together, having enough to eat is not as big of a problem as it once was.  But man cannot live by bread alone,and that’s the reason Passport Liberia showed up at Ricks Institute.  In order to live together, Liberia needs this generation to encounter Christ, embrace community, extend grace, and empower others. If any of us are going to live together, this is a good road map to follow.