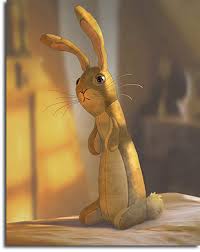 In 1922, Margery Williams wrote “The Velveteen Rabbit.” The story is about a toy rabbit that is given to a boy at Christmas. The boy plays with the rabbit briefly before laying it aside to play with his other toys. The rabbit soon struggles with feelings of insecurity and self-acceptance and longs to be loved by the boy. More than anything the rabbit wants to become real.

Williams writes about the rabbit: “For a long time he lived in the toy cupboard or on the nursery floor, and no one thought very much about him. He was naturally shy, and being only made of velveteen, some of the more expensive toys quite snubbed him. The mechanical toys were very superior, and looked down upon everyone else; they were full of modern ideas and pretended they were real” (“The Velveteen Rabbit”).

The rabbit’s quest to become real is a timeless parable about our own struggle to become real. Since we are all seeking to measure up in the eyes of someone, to be noticed, and blessed by people we grant power to our lives, this story is as powerful for adults as it is for children.

Most of us have tried to play the role of the mechanical toys, pretending that we are superior to everyone else so we will feel better about ourselves.

Most of us have also been on the other side of the fence, struggling to become real when the world around us is looking down on us, snubbing us, and telling us that we that we don’t measure up to its standards. When that happens it can feel like we are being held hostage by a Goliath.

Speaking of Goliath, parts of that story were read from 1 Samuel moments ago. King Saul and his army faced a real problem, a big problem. Goliath, a man so big he’d make Shaquille O’Neal look small, had struck fear in every soldier in King Saul’s army.

“Choose a man and have him come down to me. If he is able to fight and kill me, we will become your subjects; but if I overcome him and kill him, you will become our subjects and serve us.” For forty days the Philistine came forward every morning and evening and took his stand.” (1 Samuel 17: 9,16)

No one had the confidence to face him. The entire army began to measure their self-worth in the face of this giant. This was an embarrassing time for this army. One Philistine was holding them hostage.

Who has played the role of Goliath in your life? For the toy rabbit it was all the other more expensive toys. They all snubbed him. The mechanical toys were very superior and looked down on the rabbit and all the other toys.

Some people grow up with the voice of a critical parent telling them over and over that what they have done isn’t enough. That B+ should have been an A. You missed a spot when you mowed the lawn. Instead of the “job well done” on the win, you were lectured on the tackle you missed or the shots you did not make.

Even when we no longer live in the giant’s house, that voice can follow us long after we have moved away.

Your Goliath might be your circle of peers who look down on you if you do not conform to their idea of fun, or what you should wear, what you should think, or say or do. Your peer group can be the giant that you allow to control you because they make you feel insignificant and make you doubt that you have any worth unless you conform.

Whatever is stomping around inside of you, stealing your joy, robbing you of the chance to become what you were made to be is your Goliath.

One day as Goliath taunted the army in the Valley of Elah, a young shepherd named David showed up on an errand for his father Jesse. David’s three older brothers were serving King Saul in his army.

David arrived because his father Jesse had sent him to the front lines to carry some food to his brothers and commanders. After visiting with his brothers, Goliath showed up for his daily taunting of the Israeli Army.

David had already heard about Goliath. Word had spread about him. The word had also spread that the king would make the man who killed the giant wealthy and would give his daughter in marriage.

David verified this from some of the soldiers. But as he was speaking to them, David’s oldest brother began treating him like older brothers are sometimes prone to treat younger brothers.

“Why have you come down here? And with whom did you leave those few sheep in the wilderness? I know how conceited you are and how wicked your heart is; you came down only to watch the battle.”

Perhaps Eliab was so angry because David had seen that his brother had no courage to face Goliath.

“Now what have I done?” said David. “Can’t I even speak?” He then turned away to someone else and brought up the same matter, and the men answered him as before. What David said was overheard and reported to Saul, and Saul sent for him.
Eliab, David’s older brother is one of his Goliaths. While he respected his older brothers, David was not dependent upon them for his sense of significance and self-worth. We have to be very, very careful who we give away our power to and the right to affirm our self worth.

While David respected Eliab, he did not give up his power to him. He did not allow Eliab to decide his future, nor frame the attitude of the present moment.

There was something about David’s demeanor and confidence that caught the attention of the King and so the king sent
for David.

As it turned out, David had the confidence of a Ronda Rousey. He thought he could defeat anyone he faced, including this giant. Why was that? Was David one of those young cocky, over-confident types, so cocky that he didn’t think he could die?

Giants don’t have to kill us to own us. They just have to cause us to become something other than what God made us to be.

For forty days Goliath owned the army of Israel. They were paralyzed, held hostage by fear, worry, anxiety, and a lack of courage and faith.

Some of you may be held hostage by some of these same emotions this morning.

Our fears, insecurities, and self-doubts can keep us from finding our real self.

David was an exception. He broke through. He learned that he did not have to listen to the voices of his brothers or to his own fears, but could believe that because of the power of God it was possible to overcome giants and that’s the reason he could face Goliath.

When Saul tried to equip David with his personal armor, David was even true enough to himself to say, “I cannot face Goliath in these because I am not used to them. This isn’t me.” So he took them off. He was even real in the presence of the King.

He did not have to pretend to be someone that he was not. Neither do you.

Remember this next time you meet those who make you feel insignificant because they claim superiority over you in some way or claim that their ways are superior to the ways of God. These people are often covering up for their own inadequacies. Their boasting is often a front for inadequacies you cannot see.

Even when you think they have it all together, behind it all there are things you cannot see.

Malcolm Gladwell, in his book “David and Goliath,” floats the theory that Goliath had a disorder known as acromegaly, a tumor on the pituitary gland.

“This disorder, identified in the late 19th century, manifests as gigantism, and it may affect vision. He cites Goliath’s slow movements; his request that David come to him rather than the other way around; his need for an attendant to walk with him onto the battlefield; even the fact that Goliath taunts David by saying, “You come against me with sticks?” in the plural, when, in fact, David is carrying but a single stick.”

It’s a plausible theory. Even if it were true, King Saul and the army could not have known there were any weaknesses in Goliath. All they could see was a giant, an imposing figure they believed was superior to them all.

The reality is that we all have weaknesses. We all have deficiencies. The Bible teaches that if we do not recognize we need the Lord in our lives, that is our greatest deficiency of all.

As it turns out, there were inadequacies present in Goliath. Otherwise, a rock-slinging shepherd would never have killed him.

He was arrogant and over-confident. He underestimated his competition and he left the most important place on his body unprotected: his forehead, where David placed a stone with great skill with his slingshot.

If we are looking anywhere else for our self-worth and our security besides the Lord, we are going to struggle with being real.

That is one of our biggest problems in our quest to become real. We give power away to our family, to our peers, to the opinion of others. Why? Because all of these are important to us. These all contribute to our social and psychological well-being.

However, we should never sell our souls to them. Never. King Saul and his army became paralyzed by Goliath. Thankfully, along came a humble, courageous shepherd to free them from their paralysis. He was able to do so because God was with him.

That’s how we are freed from our paralysis. That’s how we escape those who hold us hostage with their words and attitudes of superiority.

Jesus went to the cross to remind each of us of how real we are to Him. No one, no single event, past or present, should have control or power over your life forever because Jesus has taken those upon himself and declared that you are worthy to be free to become the person God made you to be.

Does that mean we can get rid of a Goliath in a moment, in a day, in a week? It’s different for everyone and every issue.

David got rid of Goliath with one stone but he picked up five. He was prepared for a longer battle. The soldiers in the army might have had to deal with their shame of running and hiding for a while.

For very traumatic things that happen and for things that have happened over time, it takes time, but it still takes God. God is bigger than any giant!

When you hear those voices, nail them to the cross. When you do, your self-esteem will rise. You know to whom you belong and others will not be able to own you and people will take note of your confidence. It will not be an arrogant self-confidence, but rather a humble, courageous confidence based in the Lord’s empowerment.

When we spend time with Jesus, that’s when we become real and others will take notice.