One of the most popular game shows on television is “Family Feud,” hosted by comedian Steve Harvey. The show pits two families against each other who try to guess the answers to 100-question surveys.

However, I’ve noticed that family members don’t actually feud with each other. They are always clapping and encouraging each other even when one of them gives a dumb or an embarrassing answer.

I know when the show is over there has to be some feuding or blaming. “I can’t believe you said that. Now the entire country is going to think that’s what goes on in our house.” Or, “if you had just said the obvious we would have won the money.”

It is very difficult for us to take responsibility for our own mistakes so we often shift blame to others.

A student fails an exam and gets mad at the teacher for preparing a lame test.

A motorist goes the wrong way in the parking garage but he’s the one giving the middle finger to the people going in the right direction.

A man blames his wife for not understanding but he’s not making a real effort to communicate. 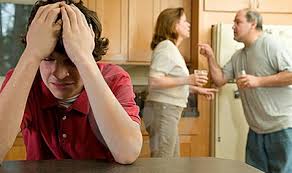 A teenager gets in trouble with the law and his parents argue over who is to blame for his actions. https://www.psychologytoday.com/blog/what-would-aristotle-do/201207/stop-playing-the-blame-game

It seems like we have been doing this blame-shifting for a long time.

God confronts Adam in the Garden and asks, “Have you eaten from the tree that I commanded you not to eat from?”

12 The man said, “The woman you put here with me—she gave me some fruit from the tree, and I ate it.”

13 Then the Lord God said to the woman, “What is this you have done?”

However, it seems that it is our human nature to first look outside ourselves to find blame and find fault with others before we look inward to find what fault lies within us that has led to conflict, pain, a lack of productivity, bonding, and love. Jesus once accused the Pharisees of having a plank in one eye while they pointed out the speck in their brother’s eye (Matthew 7:15).

Part of the gift of freedom given to us by God is that we must take ownership of our decisions. Passing blame to others is not healthy for us or others.

As we turn the page of this Genesis story over one more chapter we find the story of brothers Cain and Able. Here we see another example of blame shifting.

Able was a keeper of the flocks and his brother Cain worked the soil.  Cain brought some of his fruit from the soil as an offering to the Lord. Able brought fat portions from some of the firstborn of his flock as an offering.

God looked with favor on Abel’s offering but not Cain’s.

Hebrews 11:4 says, “By faith Abel offered to God a more excellent sacrifice than Cain, through which he obtained witness that he was righteous, God testifying of his gifts; and through it he being dead still speaks.”

So, something was not right about Cain’s heart when he brought his offering. It’s a reminder that God isn’t interested empty religious ritual. God wants it to result in changed hearts.

Even though Cain brought an offering, his heart wasn’t right. When he realized that his offering had not given him the peace and closeness to God that occurred for Abel, he became angry.

“6 Then the Lord said to Cain, “Why are you angry? Why is your face downcast? 7 If you do what is right, will you not be accepted? But if you do not do what is right, sin is crouching at your door; it desires to have you, but you must rule over it.” (Genesis 4:6-7).

Instead of taking responsibility for getting his own heart right with God, he blamed his brother.

We see this all the time in family systems. A son is at odds with his father and instead of looking at how to repair the relationship, he blames all the problems on his sister because she has been the favorite in the family.

A wife is at odds with her husband and instead of looking at how to repair the relationship, she blames all the problems on the ex-wife.

Blame is just a thinly veiled word for “anger.” If you are blaming someone for something, check and see what it is that you are angry about.

Who do you blame for your problems this morning? I am not saying that there are not people who have’nt harmed you, who are not at fault for wounding you, and who are robbing you of joy and peace.

What I am saying is that when there is anger at your door, the words of God to Cain are just as powerful to us as they were to Cain, “Sin is crouching at your door; it desires to have you, but you must rule over it.” (Genesis 4:6-7).

We must realize what emotions are going on inside of us and we must do our part to do what is right because if we do not, Cain has shown us the potential that lies within us.

We see this potential being played out on the world stage every day. Just turn on the news, log onto the Internet, open a newspaper and you will discover people killing each other because they blame others for the problems they are experiencing in their world.

The word for this is “scapegoat.” Families, the workplace, and peer groups all have scapegoats. Throughout human history the one group of people who have been the scapegoat of more of the world’s problems than any other have been the Jews.

For a thousand years the scapegoat of choice in Europe and in the Middle East has been the Jews. The Jews were the non-Christians in a Christian Europe and the non-Muslims in an Islamic Middle East. (“Not in God’s Name,” Jonathan Sacks, Schocken Books, New York, 2015, p. 76).

When we offer no effort to understand those who are different from us, the result is that we de-humanize them, and sometimes we demonize them. One way to do that is to blame them for all our problems.

Even though the Jews were a politically weak group within the German culture after the First World War, for Hitler, they became a convenient group to scapegoat.

In blaming the Jews for all of Germany’s problems and the world’s problems, Hitler was then able to deny that the problems which lied within Germany’s culture. They then embarked on a pathological plan of destruction that has affected the world ever since.

If you look at history, you can see evidence that Muslims and Jews lived harmoniously in places like Iraq, Pakistan, and Afghanistan for hundreds and hundreds of years. But what we have now seen is a systematic genocide of Jews and Christians from these countries. Why?

Because these faiths have become scapegoats for the problems in those countries. Anything Jewish, Christian, or Western is blamed for their problems by Muslim extremists and they are attacked.

We have still not advanced a lot since the days of Cain and Able. At the heart of humanity, we have misunderstanding of one another, mistrust, and an unwillingness to love our neighbor as we love ourselves.

Otherwise, there would be a greater effort to befriend, dialogue, and understand life from the viewpoint of someone else, instead of just trying to lord our ways over the other, which almost always leads to conflict.

In the movie “Dances with Wolves,” the Sioux are trying to decide what to do about a white man that has moved into their territory. Wind In His Hair says, “If this council decides to talk with the man at the soldier fort then it will be so. But in my mind it is not right that a Sioux chief, a chief as great as Ten Bears, goes to ask the business of a puny, trespassing white man…a white soldier who has only a smart horse and a few white man clothes.”

With the wisdom of a great chief, Ten Bears decides to send Wind In His Hair and Kicking Bird to meet with the white man at the soldier fort.

After a couple of awkward meetings, of trying to pick up a few words of each other’s language, they begin to get an understanding of each other and the barriers that existed began to break down.  Eventually, they became friends and they stopped blaming each other for the problems that existed.

After a couple of meetings, Lieutenant John Dunbar writes in his journal:

“Nothing I have been told about these people is correct. They are not beggars and thieves. They are not the bogeymen they have been made out to be.” http://www.imsdb.com/scripts/Dances-with-Wolves.html

The Genesis story wants us to understand that evil lies crouching at the door and desires to have us. As long as we believe that it only lies in someone else, it will consume us. Our tendency is to first look outside of ourselves and to place blame on others for misplaced truth.

So isn’t it ironic that when Jesus came and began saying, “I am the way, the truth, and the life,” and he began to show people how to love God by loving others unconditionally, it exposed people’s sins to the point that it angered them.

Each time Jesus exposed the sin of the religious leaders, instead of looking inward and trying to become what God wanted them to be, they finally became so angry, that they did the same thing Cain did to Able – they killed. They killed! Except they had to convince the Romans to do it for them, because, Jesus was family.

When they did this, Jesus became the scapegoat.

Actually, the irony of this is Good News for us. Second Corinthians 5:21 says, “In Christ God put the wrong on him who never did anything wrong, so we could be put right with God.” (The Message).

In the Old Testament, on the Day of Atonement, the high priest symbolically placed the sins of the people on a goat released it in the wilderness. Symbolically, the scapegoat took on the sins of the Israelites and removed them. Jesus took our sins upon himself when he died on the cross. He took the blame for our wrongs.

Don’t make others the scapegoat. It’s time to look inside yourself and allow God to make things right in your heart.

The Good News is that the Lord Jesus has taken all your sins upon himself. He loves you unconditionally.

Come to Him in confession. Lay your burdens on him. Allow him to help you master the problems, find peace, and restore relationships.