Making Room For the Journey 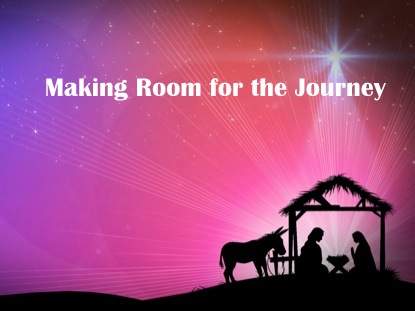 In the book of Genesis, Abram, who later became Abraham, was given instruction by God to leave his country, his people, and his father’s household and travel to a land that God would show him.

Now imagine Abram having to explain to his wife at age seventy-five that were packing up all their possessions to go to a place where they had never been but he’d know when he got there because God would tell him he had arrived.

I’m not sure many wives would be all that excited, but Abram’s nephew was apparently stoked enough about this adventure that we went along with the couple.

So the three of them set out on this journey of faith that forever changed the history of world religion.   More about that in a moment.

First, what’s is it like to walk by faith?

Pretend for a moment that for the next couple of days you were struck blind but through the world of technology you were able to use your smart phone as your eyes.

Who knows, perhaps one day Siri will put seeing eye dogs out of business.  I guess that would save a bit on dog food, although she wouldn’t be much of a companion.  All you have to do is hold up your phone and Siri becomes your eyes and tells you all you need to know about the world around you.

But would you be able to trust her?  Could you walk by faith?

That faith would either increase or decrease based on Siri’s ability to keep you safe, lead you to the right places, and keep you from getting lost.  As soon as Siri let you down, the relationship between you and that voice inside that phone would be broken.

I guess the same thing is true with the smart cars they are now testing.  If the roads are going to be filled with cars that drive themselves while we sit back and read or catch a nap, they will have to earn our trust.  They will have to prove they can deliver us where we want to go and do so better that we can do it ourselves.

Right now on the roads in Ohio there is a self-driving 18-wheeler being tested – talk about faith.

We all had rather live by sight, preferably our own.  We don’t want to be dependent on anyone else telling us how to live.  We all like our independence.  We all want to make our own decisions.  Who, after all, do we trust more than ourselves?  Depending on a phone to help us cross the street or a car to deliver itself through Atlanta would require a lot of trust.  Most of us had rather trust in ourselves.  That proves true in other areas of life as well.

Herein lies the human problem.  We are easily deceived.  From the time the serpent deceived Eve in the garden until now, we cannot trust ourselves to make good moral choices all the time.   A proverb in the Bible says, “There is a way that appears to be right, but in the end it leads to death” (Proverbs 14:12).

Sure, we may make a lot of good and right choices, enough to think all of them are good and right.   But of course, they are not.

If life is a journey, then it would be fair to say that most of us don’t want anyone packing our bags, making our reservations, planning the itinerary, telling us where we have to stay, for how long, or when we can leave or return.

Abram gave up control of his life to God by obeying him and making the journey to Canaan.  There were no guarantees he’d make it there safely.  He’d never been there so he went there on faith to a land that he believed would support his family.

He had no map, no GPS, no scouts, nothing but the whisper of God’s voice telling him where to turn and when to stop.

Placing his faith in God meant allowing God to be his Siri.   That took great trust.  The journey had its share of bad decisions, wrong turns, and learning experiences.  Abram learned a lot about faith and trust along the way, but Abram stayed in relationship with God and because of that, he and his family made it to a place that is still the land of the Jews, the Holy Land of God, the place where Jesus was born.

This is the reason this journey of faith changed the religion of the world.

So fifteen hundred years later, another journey was made to this same land by men coming from the East.  They were astrologers and their visit coincided with the birth of Jesus.

The traditional number of three men is used to match the number of gifts brought to Jesus and his family.  Actually, we don’t know how many men there were.  Perhaps there were two; perhaps many more.

However, their journey, like Abram’s, was a journey of faith.   They were also going to a place they had never been and their journey was also compelled by the Spirit of God.

Do you believe our church is being pulled into the future in a specific direction by the Spirit of God?

How about your own personal spiritual journey?  Do you feel pulled in a specific direction by the Spirit of God?

It’s obvious that Abram and these astrologers were in touch with God’s Spirit enough that the journeys they were on were inspired by God.  They seemed to believe that they had to pack their camels and head toward the unknown if they were going to have peace.

During this Advent season and beyond it, make room for the journey.  Open yourself up to the possibilities that God has for you.

The story of Abram and the Wise Men can be your story in the sense that the same Spirit of God that spoke to them speaks to you.

Your journey may take you places in Jefferson that you never imagined you would go.  Your story will take some of you away from Jefferson, even out of the state or country.

Whenever we embark on a journey of faith, we become open to going where God wants us to go and doing what God wants us to do and that often takes us out of our comfort zone.

We learn things about ourselves and God we didn’t know.  This kind of journey almost always involves moving ourselves out of the center of our lives and placing God there.

What is the second most important thing outside of loving God with all our heart, soul, mind, and strength?  Loving others as we love ourselves.

Peace comes when we plan with the right purpose in mind.

Many people are good planners.  But what good is planning if we are planning for a journey we shouldn’t be taking or planning to carry items that have no value.

Faith is not the absence of planning.  Faith is yielding our lives to God through Christ.

I’m sure Abram and the Magi planned extremely well or they would not have survived their journeys.   Their journeys had purpose and their purpose required faith, but we have to make sure that we are placing our faith in the right place.

Noah planned with purpose when he built the Ark, but he did so with faith that it was going to rain.

Men planned with purpose when they built the Titanic, but they didn’t build it thinking that it could sink.

With each stage of the journey faith was tested.  The journey wasn’t easy.  Yet they remained faithful.

Our journeys will not be easy either.  God has never said that faith is an easy thing.  In fact, the path of least resistance is to do what seems right to us, but as the proverb reminds us, that path will ultimately produce the most pain.

The path that leads to peace is the one of faith.  Are you on that path? You are the only person who knows whether you have peace in your heart.  If you don’t, then it’s time to adjust the journey you are on.

If your life is not characterized by a journey of faith where you are following God and doing with your life what God wants, then you are going to miss out on the best part of life.  For Abram it was the Promise Land.  For the Magi it was the opportunity to worship the Savior of the World.

What will it be for you?