Mark Richt—Winning With Integrity At UGA 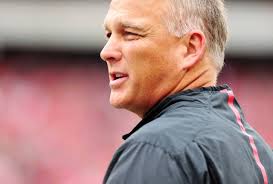 The University of Georgia’s football coach Mark Richt was praised recently for his ethics and integrity.

The USA Today article written by Dan Wolken cited Richt as being among the best in college football in these areas, but pointed out that seven colleges within a 350-mile radius of Athens have won a combined 14 national titles since Georgia won its last title in 1980.

Wolken suggested that this could be in part because other schools have been more lax and liberal with policies that allowed players in trouble to continue to play, while Richt has been quicker to suspend and even sever ties with players for not following the rules.

The article implied that these kinds of decisions could eventually translate into a loss. As the UGA faithful know too well, just one more win in many of Richt’s seasons would have made him a national title contender.

So, is that how you win national championships? Do you have to play loose with ethics and integrity?

Richt has amassed a record of 140-49 to date as the UGA head coach. He has won two SEC championships, but he’s never won a national title like one of his predecessors, the “immortal” Vince Dooly.

That one thing “dogs” him. Even though he averages nine wins a season, it seems that there is always talk at the end of each one of finding his replacement.

Perhaps the “Dawg Nation” needs only to look back at the Phillip Fulmer era at the University of Tennessee for some reality.

Fulmer coached for 17 seasons and accumulated an impressive record of 152 wins against 52 losses. He had one national title in those 17 years and some SEC titles, but he had a couple of five-and-five seasons toward the end that got Tennessee fans restless.

How often do you think Tennessee fans have wished they had never severed ties with him? They are now on their third coach since Fulmer left, sporting an ugly 37 wins and 43 losses five games into this year’s season. They have lost almost as many games during this time than Georgia has lost in Richt’s 15 years as UGA’s head coach.

Former UGA board of regents chairman Dink NeSmith was quoted as saying that he didn’t like losing. “I want to win every one,” he said. “But I’m not willing to sell my soul to the devil just to say we won. There’s a certain pride, without being condescending, where we try to hold ourselves to a higher standard.”

That’s the wisdom that seems to prevail on the board. They understand that winning is very important in college football, but so are ethics and integrity.

The two can coexist and should coexist. After all, most of these players are continuing life in something other than football and need an example that sustains them.

UGA and every other university ought to stand for much more than football, so shouldn’t the coach that leads the program set a positive example?

The importance of ethics and integrity in football and every other aspect of one’s life was best summed up at the end of Richt’s television interview before the Georgia-Alabama game.

“Yesterday, a man walking into the Butts-Mehre Building, our football complex, found a $100 bill and he gave it to our receptionist. Then our receptionist held this money in case this person who lost it came back,” Richt shared.

“The man came back and got his $100 bill and it reminded me of Proverbs 20:7, which says, ‘A righteous man who walks in his integrity blesses his children after him,’” he explained. “Well, that man was my dad who came to the office, and I just publicly want to say, ‘Dad, I love you for your integrity and how you blessed me.’”

As the season continues to unfold for colleges around the country, games will be won and lost every week. Only one team from each conference will win the elusive conference championship and only one will be crowned national champion.

Those programs that do not sell their souls to the devil just so they can say they have won also creates a lasting legacy that blesses others.