People Don’t Forget What You are Made Of 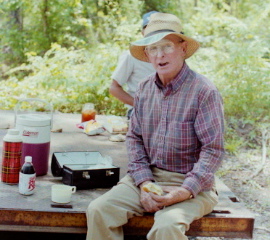 This article won a $1000 Award of Outstanding Merit from the Amy Foundation in May of 2006.

One of the stories my grandfather tells on himself comes from his younger years, a time in life when he wasn’ t as concerned about his fellow man as the person he later became.

He recalled the days when farmers would buy up feeder pigs called shoats, feed them out for a couple of months, and then sell them for a profit. One man in the community, more than all the others, had a reputation for turning good profits on shoats. One day my grandfather asked him for his secret.

He was told that the day before he sold his pigs he fed them all the sweet potatoes they would eat. After they were stuffed with potatoes, he filled up the troughs with water and syrup. The hogs gorged themselves on the sweet water. With their bellies full of potatoes and syrup water, he took them to the sale.

Some time later my grandfather had some young shoats for sale. He went to town to see if he could find a buyer for them. As fate would have it, the first person he saw was the man who had given the secret. He asked the man if he’d like to buy his shoats. The man told him he’ d come out the next day and take a look at them.

That night my grandfather fed those shoats all the sweet potatoes they could eat and then carried water and syrup to the trough until they were fat as plums. The next day the man came out to look at the pigs and bragged about how good they looked. He bought them and carried them away.

Some time later the two men met again. The buyer, who knew he had been taken at his own game, told my grandfather that he fed those pigs out on peanuts for two months and when he sold them he still lost money. Laughing, my grandfather told him that he’ d followed his prescription for fattening up the pigs just like he taught him.

The story of his younger days, though, is a reminder that the temptation to sell our integrity is high. Integrity is a virtue where a person strives for truth, consistency of character, and works hard to ensure that there is no incongruity in one’s words and deeds. A person of integrity realizes there is a cost to integrity but there is a greater cost involved when integrity is sacrificed. Integrity is doing what is right even when no one is watching.

One very inspiring example of integrity was highlighted in a 1998 Georgia House of Representatives resolution praising the accomplishments of Cleveland Stroud, a well-known coach and educator who was employed by the Rockdale County Board of Education for 39 years before his retirement in that year.

The resolution noted many awards bestowed on Coach Stroud: Citizen of the Year in Rockdale County twice, the Georgia Optimist Club’s Georgian of the Year, and the Jack Kelly Fair Play Award from the U.S. Olympic Committee. The resolution also noted his excellent career in public education, his devotion as a member of Macedonia Baptist Church and the local chapter of the NAACP, and his election as the first Black to Conyers City Council.

The resolution also noted Stroud’s integrity and mentioned one notable example that surprised the Georgia high school sports academy in 1987. It was in that year that Coach Stroud coached the Rockdale County High Bulldog basketball team to 21 wins and 5 losses to qualify for the state plat a regular substitute. In fact, this player only played 45 seconds of one game in which the team was ahead by 23 points. Only after the season did the coach learn that the student had passed only four out of six courses the previous fall, one short to be eligible.

What would you have done? The 45 seconds the player played didn’t affect the outcome of the season. Yet, rules were broken. Here is what Coach Stroud did. He wrote the State Athletic Association to inform them of the infraction. Then he wrote the local school board. Next he addressed the student body and explained what had happened and why the school had to forfeit the state championship, even though they earned it.

In  “A Morality Tale” by Paul Greenburg, Coach Stroud said, “You’ve got to do what’s honest and right and what the rules say. I told my team that people forget scores of basketball games; they don’ t ever forget what you are made of.

These prophetic words were affirmed in Georgia House Resolution 1367. I doubt any of the legislators could remember the score of the championship game that Rockdale ultimately forfeited, but they knew that Cleveland Stroud was a person of integrity. They knew what he was made of.

Proverbs 22:1 says: “A good name is more desirable than great riches; to be esteemed is better than silver or gold.”   I ‘d hate to leave this world with people remembering me as the man who made lots of money off of shoats by feeding them potatoes and sweet water. I ‘d much rather have less money and fewer trophies, and be known as someone who did what was right even when no one was looking. How about you?