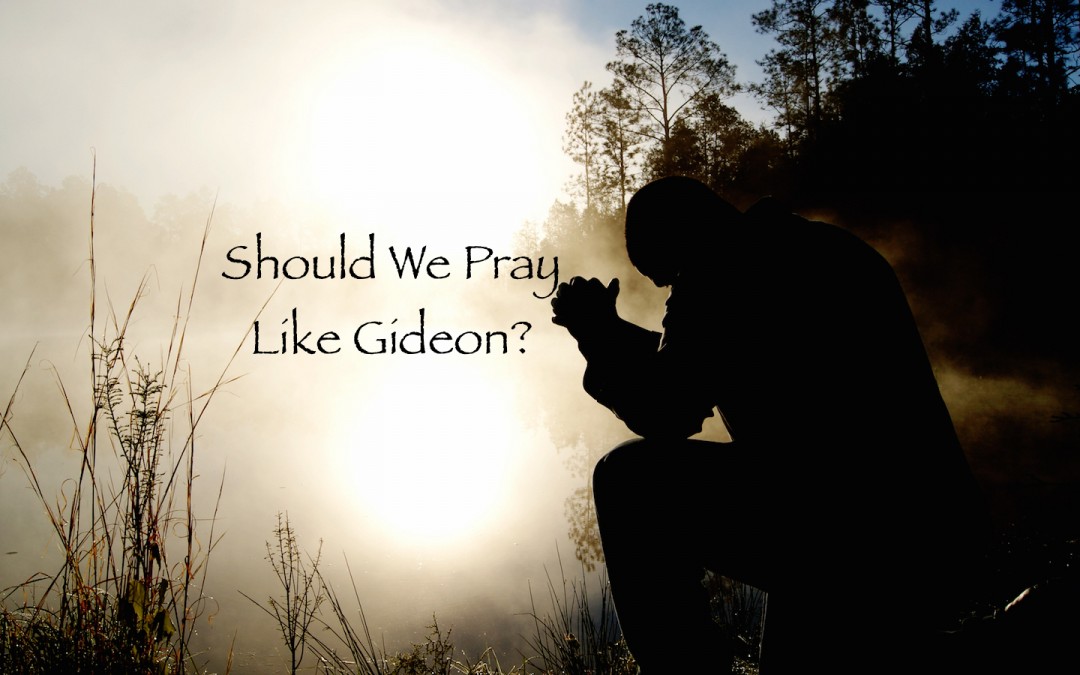 Two of the most important times in our lives to ask for God’s guidance are when we are beginning a family and when we are separating from our family.

Life is filled with mile marker events, and with each one, we should be looking for God’s guidance and asking God for wisdom through prayer.

We are introduced to Gideon in the book of Judges during a time when Israel was in shambles.  They had ceased to worship God and they had succumbed to enemy occupation.

They tried to plant crops and raise some sheep and cattle, but every time they made a little headway, the Midianites came in and ravaged what little they had.  The people began to cry out to God for mercy.

Gideon was a smart man.  He’d created a way to disguise his wheat threashing in a winepress to keep it from being raided by the Midianites.  That’s where his work was interrupted by an angel.

The angel wants Gideon to lead Israel against the Midianites, freeing them from the clutches of abusive tyranny.

Notice that the angel calls Gideon “a mighty warrior,” even though he wasn’t one yet.  He was a farmer.

God sees what we all have the potential to be.

When God looks at us, God doesn’t just see us for who we are, God sees what we can become.

Now there was nothing wrong with Gideon being a farmer.  In fact, the people were starving.  In a world where people are starving being a farmer is a high calling.  I saw a billboard not long ago that asked, “Have You Thanked a Farmer Today?”

But Israel needed to be freed from the Midianites so everyone could plant crops and harvest them without fear that the enemy would take them away?

God sent the angel to tell Gideon he had been chosen to lead an army to free the people from Midianite oppression.

What’s Gideon’s response? “But Lord, how can I save Israel?  My clan is the weakest in Manasseh, and I am the least in my family.” (v. 15)

Yet when we want something for ourselves, we will often risk our lives to get it.

The Apostle Paul once wrote that God likes to “choose what is low and despised in the world, things that are not, to reduce to nothing things that are, so that no one might boast in the presence of God” 1 Cor. 1:28-29 NRSV.”

In order for the people to realize that God was in control, he often raises up someone you would least expect to demonstrate his power.

When God came to Gideon to be a leader, Gideon wasn’t very easily convinced, even though God said, “I will be with you.”

Why is it that we don’t think it is enough when God says, “I’ll be with you?”  Why isn’t our trust level higher?”

Because most of us have a problem walking by faith.

As I’ve watched our granddaughter learn to walk, she didn’t start out walking by faith.  She held on to everything she could hold on to, even when we didn’t think she needed it.  Even though we knew she could walk without holding on to things, she wasn’t ready to walk by faith.

“Wheat thresher” sounded a lot better to Gideon, but he told God, “I’ll pray about it.”

Praying is a good thing, especially if you are trying to figure out whether you could take a job offer, date someone, change majors, make decisions in your marriage, make a significant purchase, or get involved in your church.

Gideon laid out a sheepskin, called a fleece, overnight and he asked God to make the sheepskin wet, but keep the ground dry.  If God would do that, then he would know he was supposed stop farming and lead an army.

Don’t you know Gideon was counting on that not happening so he could say, “See, God was in this after all. I’ll just thresh wheat.”

But when he woke up, the fleece was wet and the ground was dry.

No! He wants to see if God can do it again, except this time he asked God to make the ground wet and keep the fleece dry.  He asked for another miracle.

Only after he wakes up and discovers that the ground is wet and the fleece is dry does he obey God.

What if we prayed?

“I really want to marry this girl, but I’m not totally sure if it’s God’s will. So if she’s wearing a white dress on our date tonight, I’ll take that as a sign God wants me to marry her.”

“I’m not sure if I should quit my job or not.  If I wake up and there is a bird eating at the bird feeder, I’ll take that as a sign that God wants me to quit my job.”

“I’m going to close my eyes, open up my Bible at random, and whatever verse I point to, that’s God’s will for me.”http://www.sharefaith.com/blog/2011/10/laying-fleece-cool-techniques-figure-gods/

That’s so crazy.  You could land on anything from “and Judas went out and hanged himself,” to “Peter denied that he knew Jesus.”

These kinds of prayers are not necessary.  They reduce praying to a mixture of God and pagan religion.

It is not always clear to us what decisions to make.  However, God doesn’t want us complicating the decision-making process with a kind of prayer that could actually lead us away from God instead of toward God.

Just because something is in the Bible that doesn’t mean it should be in your life.

What should be in our lives is the presence of the Holy Spirit who knows and holds the future.  The Lord knows what your future holds.  Even if your clan is the weakest in Jefferson and you are the least in your family, God can use you for great things.

The key to doing anything for God great or small is learning to listen to him and be patient with yourself.  God will lead and guide you into the person He wants you to become if you walk with Him by faith.

God told Gideon that he would be with him.

That is the most important words we need to hear from God.

Through Jesus, God is always with us.  Through his Spirit, we should never doubt that his leadership, guidance, and presence.  We do not have to ask for a miracle before we follow God by faith.   We need to learn to trust the Lord and follow what we know to be right.  Where we have doubts, we should find wise people to help us discern the next best steps to take.

We should pray, but don’t pray like Gideon.   God will reveal to us to the steps we are to take.  We simply need to be willing to take them.  That takes faith, which was something  Gideon eventually exercised.

That is what we should all have in common with him.